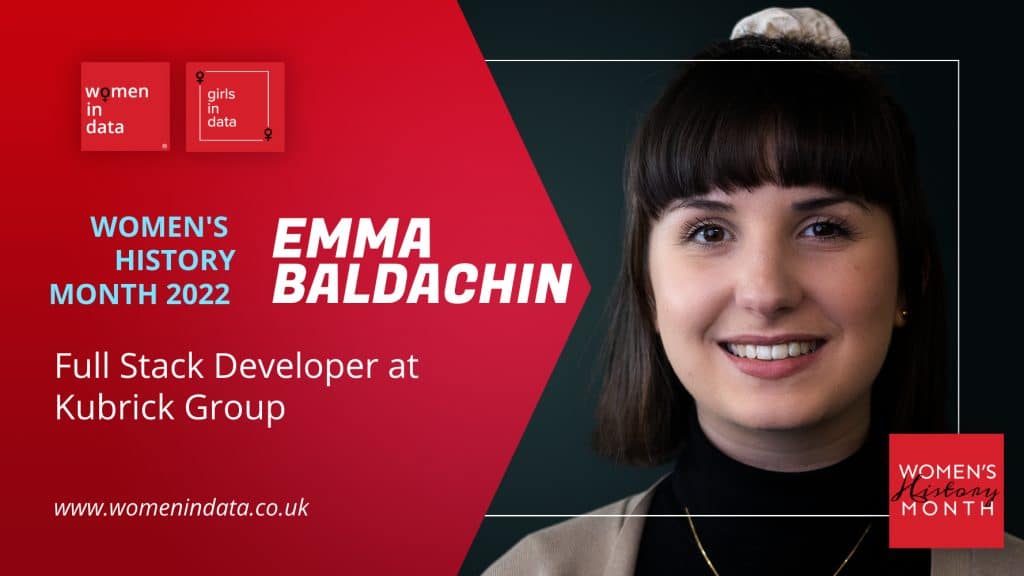 I joined Kubrick after finishing my master’s degree at the University of Manchester in Physics and Philosophy. Growing up, I loved maths and physics. I was very much one of those kids who was obsessed with black holes, as well as the concept of time and consciousness, all those deep life questions. I think that’s where the whole philosophy aspect came in – I was excited to be able to look at the big problems of the universe from both perspectives: the actual mathematical model and also what that meant beyond the maths, I wanted to know what it implied about the real world.

I came out of university feeling unsure about what I wanted to do. I knew from the get-go that I wanted to go into tech; what I loved about studying both physics and philosophy was the problem solving, being faced with challenges and applying to real world solutions. The more complex the challenge, the more satisfying finding the solution was. I had enjoyed driving my own research and working with data analysis, however I knew I definitely didn’t want to be an academic. Even though I knew I wanted to step into the tech world, I didn’t want to pigeonhole myself into any particular specialism or to any industry. I wanted to just dive into it and work out what I liked along the way. I think Kubrick was the perfect opportunity for that: the training both covered a broad range of skills while going very in-depth into the key areas, but it didn’t commit me to any specific sector or any particular side of tech. It felt like it gave me a space to learn and explore where I was heading in my next steps, while providing me with an excellent foundation. Years on, I still find the tools and knowledge I cultivated in training useful.

My time in training was brilliant, but it was no joke – it was fast paced. Everyone training alongside me very much had that appetite to be on the top of their game and to excel, and because of that, the energy was quite infectious. We were like–minded people with a strong passion to learn, so it was a competitive but incredibly supportive environment at the same time. I wasn’t expecting to be stretched like that, since I had just got my master’s degree and thought I’d find it easy, but I definitely had my work cut out for me. What really sticks out in my memory was the general sense of fun, challenge and camaraderie as well as the playful approach of Lawrence [Head of Data and Next-Generation Technology] and the other trainers. There was a lot of laughter.

My client engagement was in the public sector, working on projects which were largely data engineering and analysis. I took a lot of feedback data that was both numeric and qualitative and created a variety of dashboards. I engaged with different stakeholders so I could engineer the analysis to their needs to ensure they could understand the feedback they were receiving from the public. I did some machine learning, working on Natural Language Processing for all the qualitative data to uncover the underlying themes that existed within it. Having never properly applied myself in a professional situation, it was quite nerve-racking to then move onto a client engagement. I wondered if the skills I had acquired were going to be enough to keep up. I remember a feeling of imposter syndrome at the very beginning, especially as many people around me were turning to me for expertise and support. But in a short time those feelings dissipated and I found it really empowering.

When I started my client placement, I knew I was taking over from a previous Kubrick consultant who was moving into Kubrick Advanced [the inhouse project team] and that there was only one year left on that project. COVID extended things for a while but eventually I found myself between clients. I had remained in touch with Lawrence, and he reached out to say, “Hey, I’ve got this really cool project that we’re about to start. You should come work on it.” My immediate reaction was that I would love to work back in Kubrick – I had gotten such a good energy from the company, so I absolutely jumped at the opportunity to go back in and work on the other side of it. It’s kind of funny because I had this little inkling that I wasn’t quite done with Kubrick when I went on client site. It all lined up really well.

At Kubrick, I am currently managing the development of an internal web application. My role involves both recruiting and managing the development team, overseeing the development roadmap for both large and small scale features, managing day–to–day activities, and also looking after the team personally. I work alongside leadership to determine the high level strategy and also communicate with the majority of the stakeholders across the business, both on progress updates and also understanding how the product we’re creating is going to be a solution to them. When my calendar isn’t too busy I get to do a bit of development too. It’s essentially a project that involves digitalising some of our core processes, it’s a big evolution and an even bigger learning curve for the business – I can’t say too much about it as we are still building and starting to test, but it really is a gamechanger in how Kubrick are training the next generation of data and technology experts!

When we got sign off from Kubrick leadership to start building this, we were only a team of three and there wasn’t really anyone to devote themselves full time to the recruitment and forming of the team. Also to ensure we were working day to day in a way we could successfully execute this thing – so that’s how my role began. I naturally fell into leading the team because I was the one to assemble it and drive the initial development off the ground. Looking back on my aspirations when I left university to step into tech, they were simply to learn as much as possible. I can’t think of a better way to have done that; I have now worked on every end of the software development cycle alongside managing and leading a team and working and strategizing a project with leadership. I feel very much able to head out into the wild and pretty much pick and choose where I want to specialise in from there.

I’ve come so far from experiencing that impostor syndrome when I first went on client site, but I came to realise this was a sentiment across a lot of the female colleagues that I had – not just within my training cohort but within my client organisation, too. What I struggled to learn at the beginning – and it sounds a bit cliched – is that excelling in tech is very much about having the right mindset. You have to walk into any situation thinking to yourself, “Here is a problem. I don’t know what the solution is yet, but I will find it.” It’s about having the confidence to just get started, and to keep that confidence that you’ll work it out through all the blood, sweat and tears! I’ve found that a lot of men seem to have that kind of confidence to bulldoze through much more easily than women and we need to overturn that social conditioning, especially for women in tech. We just need to promote that attitude of self-belief to say to ourselves: “I will do it eventually. I know I can.”

Emma Baldachin is an Engineering Manager leading in one of Kubrick’s internal platform creation initiatives. She trained as a Data Engineer with Kubrick in 2018.